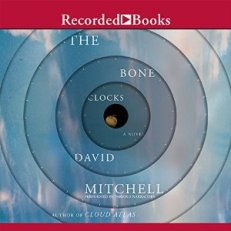 The Bone Clocks is a supernatural sci-fi novel told in 6 parts, from the viewpoints of 5 different characters, about a group of humanistic beings who never age, and how their “lives” affect a group of mere mortals who fall into their paths.  Each of the 5 main characters is highly flawed, and yet when you hear things from their points of view, you find yourself empathizing with even the basest of individuals, a testament to David Mitchell’s excellent writing and character development.

But while I enjoyed getting to know each of the characters, something in the story fell flat for me.  The reader is left in the dark for much of the novel about how exactly this world works, until the fifth chapter when the answers are finally revealed.  And yet this was the chapter in which I found my attention wandering most.  I didn’t so much care about the world in which these people live, or the (super lame) battles they fight through, as I felt moved by their everyday struggles and encounters.

If David Mitchell had chosen to make this story a simple study of characters, more so than a supernatural saga, I think I would have enjoyed it more.

The Bone Clocks is a bit difficult to listen to because it seems to take place in our world, until something just slightly off happens, causing you to rewind and make sure you heard correctly.  Spoiler alert: you probably did!  Despite the novels oddities, each of the audiobook narrators did a superb job, and thus the audiobook gets 5 stars from me.

But I cannot finish this review without mentioning the random, apocalyptic final chapter that felt like it came from another book entirely.  While I typically enjoy apocalyptic and post-apocalyptic fiction, I did not feel this was the place for it.  Take it out and make it a story all on its own, and I’m in!  But the way it was written left me feeling like I got 2 novels for the price of one.

⭐️⭐️⭐️⭐️ for Beach Read by Emily Henry I really enjoyed Beach Read, but to be honest, it’s a little forgettable. It starts off like a rom com, which the cover would certainly imply. But it ends up getting a little darker as the plot moves along. I thought the story was cute, but I’m still a little confused why it’s called Beach Read. Didn’t the main characters live on a lake? Part of the conflict in this novel has to do with the two main characters just not communicating, which is a major pet peeve of mine in romance. There were also a few too many coincidences for my comfort and liking. Nevertheless, it was light, fun, enjoyable, and just what I needed for the summer! The banter is witty, and I enjoyed reading the “inside world” of authors. —— #beachread #emilyhenry #modernmrsdarcy #mmdsummerreading #summerreading #srg2019 #bookofthemonth #beachreads #bookreview #bookreviewer #bookphoto #bookphotography #bookstagram #booklove #bookobsessed #bookaddict #readingaddict #readinglife #bookish #bibliophile #bayoubibliophiles #booknerd #booknerdssharelove #mmdfirstladies #booklover #bookstagrammer #readersofinstagram #jefreads #thereaderchronicles
⭐️⭐️ for The City We Became by NK Jemison This was my first book by NK Jemison, so I’m not sure if I don’t like Jemison or if I just didn’t like this book. But let me reiterate, I did not like it. Even though I really wanted to! When I first heard the premise on @whatshouldireadnext, I thought it sounded so cool! The five boroughs of NYC, personified, must band together to fight and evil other world city trying to take over. I recommended it to a friend based on the premise, and we she rated it 2 stars, I grew nervous. Unfortunately, I started confused and just continued to get annoyed. Manhattan’s name? Manny. Bronx’s name? Bronca. Staten Island? Aislyn (pronounced Ice-Lin). I just couldn’t stomach the ridiculousness. But I suffered all the way through because not only is this on @annebogel’s Modern Mrs Darcy summer reading guide, it’s a minimalist pick! I know that not every book is for every person. But I wanted this one to be for me. Alas, on to the next one! —— #thecitywebecame #nkjemison #modernmrsdarcy #mmdsummerreading #mmdsummerreadingguide #summerreadingguide #summerreading #audiobook #audiobookstagram #booklove #bookstagram #bookreview #bookreviewer #booklover #bookish #bibliophile #bayoubibliophiles #mmdfirstladies #readinglife #readingaddict #bookaddict #bookobsessed #jefreads #thereaderchronicles
⭐️⭐️⭐️💫 for Lovely War by Julie Berry I wanted to like this book, I really did. The book as a whole was only 3 stars for me. I slogged through it, and if it hadn't been a Modern Mrs. Darcy book club pick, I likely would have abandoned it. This was my second time trying to get through it, and I should have just realized it wasn't for me. So why the extra half star? I loved the premise! Several Greek gods, disguised as mortals hanging out in a hotel room, tell the story of a couple of couples in WWI. I loved how each god played their own part in the story -- Ares told the war parts, Aphrodite the love parts, Hades the death parts. But as for the couples... I just didn't feel connected or invested. That extra half star also includes a bump because I was unable to predict where the story was going at any given time. Julie Berry surprised me several times, and I always appreciate that in a book! Did you read this for book club? What did you think? —— #lovelywar #julieberry #modernmrsdarcy #modernmrsdarcybookclub #mmdbookclub #mmdsummerreading #bookreview #bookreviewer #booksofinstagram #readersofinstagram #bookworm #booklover #booklove #booknerd #booknerdssharelove #bookaholic #readingaddict #readinglife #mmdfirstladies #bookish #bibliophile #bayoubibliophiles #bookblogger #jefreads #thereaderchronicles
Summer Reading Guide unboxing may be my favorite day of the year. It certainly ranks up there with all the best holidays and my birthday. And this year, it was JUST what I needed. Each year, @annebogel reads hundreds of books to bring us the latest and greatest reads for the summer. She puts them into a beautiful guide and voila! Magic and bunch more books on my TBR. So far, I own 4 physical books and 2 audiobooks from the guide. I’ve read 6 and I’m on my 7th. And that’s just from the regular guide! If you’re a member of the Modern Mrs. Darcy book club or the @whatshouldireadnext Patreon community, you get an extended version of the guide with bonus books. Are you a member of either community? What books are you most looking forward to this year? —— #modernmrsdarcy #mmdbookclub #whatshouldireadnext #mmdsummerreading #summerreadingguide #tbrlist #bookstack #booklover #booklove #bookworm #bookstagram #bookstagrammer #booknerd #booknerdssharelove #mmdfirstladies #booksofinstagram #bookobsessed #readingaddict #readinglife #summerreading #bookofthemonth #thereaderchronicles
Thanks to @librofm and @hachettebooks for the free ALC. 🌟🌟🌟🌟💫 for 28 Summers by Elin Hilderbrand. This is an unconventional love story. It’s spicy. It’s scandalous. Sometimes it’s hard to read. And at the end, you better be prepared with tissues. I ugly cried! But the journey was so good and so worth it. I will read anything Elin Hilderbrand writes, and rarely does she disappoint. 28 Summers certainly does not. And I’m already looking forward to the sweet romance that I’m sure will follow. —— #28summers #bookreview #bookreviewer #bookstagrammer #bookstagram #booklove #booklover #bookish #booknerd #booknerdssharelove #bookaddict #readingaddict #audiobookstagram #librofm #bookobsessed #mmdfirstladies #bibliophile #bayoubibliophiles #readinglife #jefreads #thereaderchronicles
Perfect place to read a book called Beach Read? The beach! What are you reading right now? —— #beachread @emilyhenrywrites @berkleypub @bookofthemonth #bookofthemonth #botm #beachreads #beachreading #bookstagram #booklover #bookish #bibliophile #mmdfirstladies #booknerdssharelove #booknerd #bookstagrammer #bookaddict #booksofinstagram #readersofinstagram #readyforsummer #readabook #summerreading #bookobsessed #bayoubibliophiles #readingaddict #thereaderchronicles
Follow The Reader Chronicles on WordPress.com